Music as Brain Food for Tots

Kindermusik classes in South West Atlanta are starting soon! You can check out the instructor’s, Ms. Wendy’s web site at www.mylittleovertures.com. She is a retired music teacher of 31 years and would be glad to have you and your little one in her class. A.J. and I will be participating again. We hope to see you and your little one, too!

I made some matching instrument cards for A.J. found here.

We played a few times so that he could get the hang of it.

My Sister bought A.J. a keyboard for Christmas. He likes to play it, especially when I have to put his drum away because he threw it on the floor out of frustration! (I must say that he has stopped doing this over the past week!)

Last weekend my husband and I took A.J. to see the performance “Blast.” It is a drum, dance, musical ensemble that is EXTRAORDINARY! I had never seen a performance like this before. The musicianship was incredible and the drummers inspired A.J., too! I found this YouTube clip of one of the numbers called Drum Battle. It’s off the chain on video, but even more so, live. 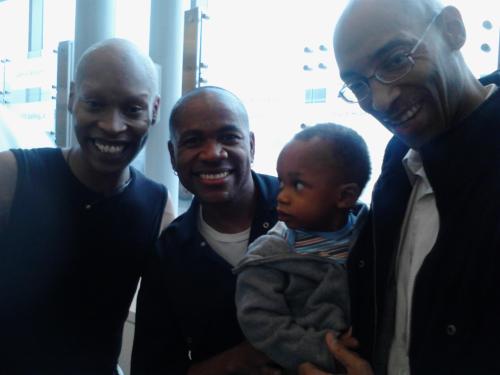 A.J. with his Dad and two of the "Blast" percussionist.

This Saturday we attended the Honda Battle of the Bands. Although Florida A&M  University was not in attendance, the schools that represented, showed up and out!

Finally, the Library of Congress has wonderful Podcasts on Music and the brain. Check  out these podcasts,  here.

How do you share music with your little one? 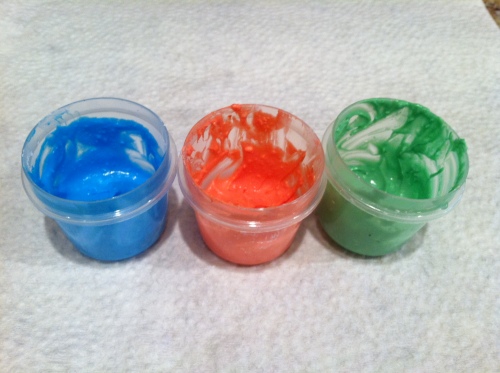 I made some fun homemade face paint for A.J. that I discovered through my absolute favorite site, Pinterest. The site Kleenexmums.com  had the recipe and I just so happened to have all the ingredients on hand. 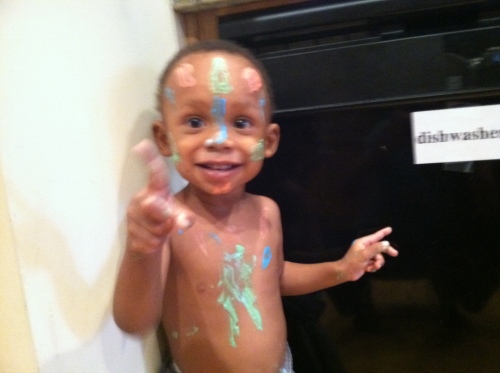 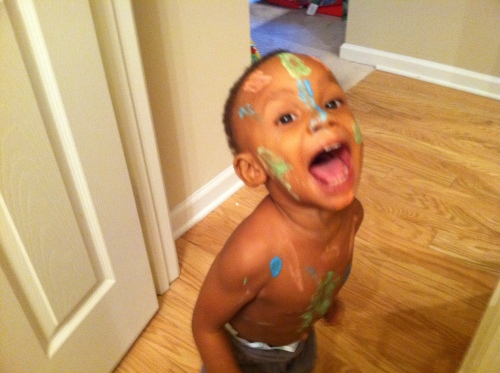 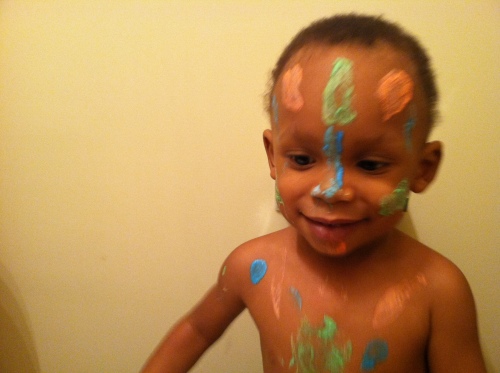 I didn’t leave the paint on long as I wasn’t too sure about how our skin would react. Everything turned out fine. There’s no staining or breakouts to report!

I showed A.J. photos of people in other cultures who paint their faces and bodies.

The look on A.J.’s face was priceless, too bad I didn’t have my camera available to capture the shot.

Do you have another recipe for face painting that you use? 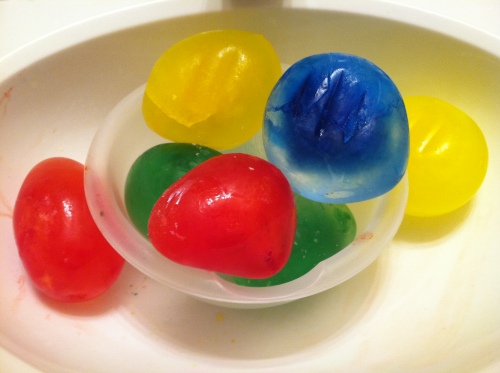 There is so much you can do with balloons and food coloring. Ice-balloons for bath time or snow fun is one of them. Freezing balloons with food coloring inside is  a neat idea that I discovered from the blog Hurrayic. A.J. thought it was fun, too. He didn’t want to handle the cold balloons as much as he did the ice cubes, but he liked watching the ice balls melt in his bath water.

I wanted to practice his 3-finger pincer grasp by using a clothespin to transfer mini pom poms, but he was not ready for this activity. Instead, he used his hands, but in all honesty, he wasn’t feeling this activity at all and only did it once. He dumped out the mini pom poms and went on his way. Oh well… 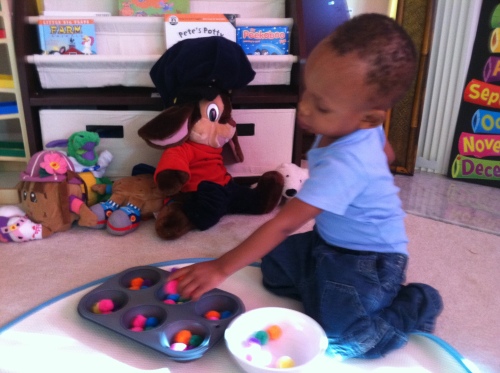 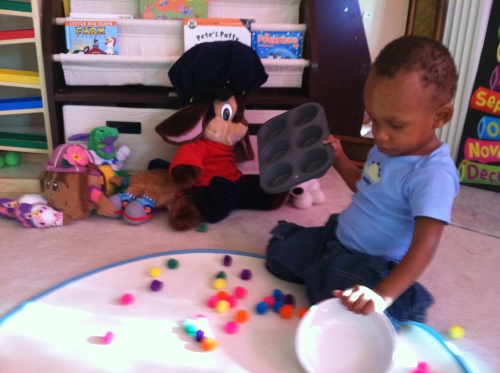 To keep A.J.’s interest we played “marching band.” I put in a video of Florida A&M’s Marching 100 band and we danced and marched around. A.J. didn’t know that we were in fact developing his Gross Motor Skills!

What other balloon fun have you had lately?

Many kids lose their enthusiasm for reading early in their educational process. A.J. loves to read and I’m going to do my best to keep his fire for knowledge and reading blazing! Here are 3 simple ideas that I’m incorporating to keep his fire burning:

Can you spot the present on the shelf?

1. Wrapping new books – I will attractively wrap any new book that buy for him and place it on his bookshelf as a surprise. This will not only give him an opportunity to practice Wrist Motion, but inspire him to read the new book.

2. Rotate books available to him – I want to keep the books that he has available to him fresh. Displaying the covers of the books instead of the spine only entices A.J. and other little ones to pick up books to read. That’s why having a front facing bookshelf is helpful.

3. Place words of items around the house – Lastly, the more words A.J. knows, the better off he will be when he starts reading more comprehensively. He now enjoys pointing out the items in the house with labels.

What are you doing to keep your little one(s) engaged in the love for reading?

Posted in Activities for toddlers, Reading/Vocabulary

A.J. experienced a puppet theater for the first time this week. I created a show based on his favorite stuffed animals, featuring one of the characters in particular. The title of the show is Chip Makes Choices and So Do YOU! Hey, what can I say, it’s never to early to start teaching about decision-making. I performed act one and will complete the rest of the acts this weekend, when I finish writing the script.

I had the idea of creating a puppet theater for a long time, but Deborah Stewart of Teach Preschool made it look easy, inexpensive and doable. Pictures of her puppet theatre made from tri-fold poster board was the inspiration I needed to move to action. Thanks Deborah!!

In order to make my stick puppets I took pictures of A.J.’s stuffed animals, laminated them and cut them out. I placed each photo on large colored popsicle sticks and voilà!

I cut an old panel curtain to make the curtains for the theater. There was no sewing involved, only staples and duck tape! I used the art supplies I had on hand to decorate and have since thought of other creative ways to enhance the set during performances.

It was important to me that A.J. saw my puppet show first, so he wouldn’t or should I say, I wouldn’t think less of my homemade version once we saw a professional show at the Center for Puppetry Arts. Okay, I know I need to relax! 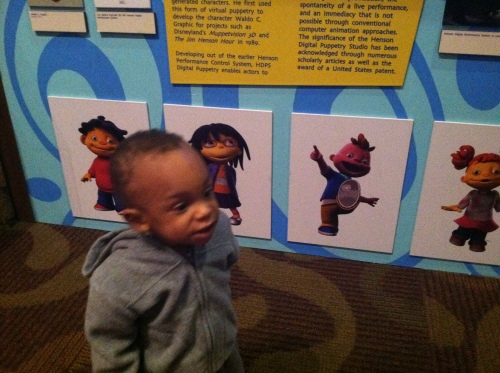 A.J. on a tour of the Center for Puppetry Arts

Although The New Adventures of the Gingerbread Man was elaborate and entertaining, seeing it didn’t diminish the pride of my first attempt at creating a puppet theatre.

I must admit though, the artistry of the puppets seduced me into purchasing two after the show. 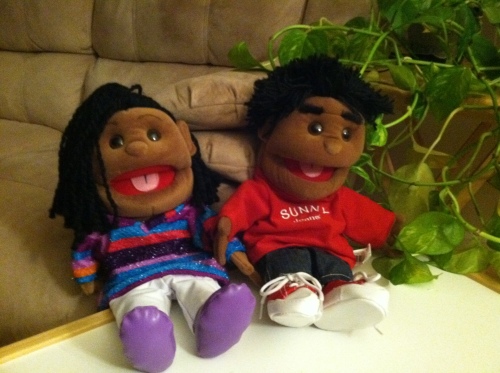 The new kids on the block!

Yesterday, we also had more fun with streamers! This time I taped several on our ceiling fan. I dusted the blades first, which was something I needed to do anyway.

I turned the fan on low and let the streamers gently swirl. I intentionally taped the streamers away from the lights to avoid a fire hazard. I also cut the streamers short enough so A.J. wouldn’t step on them.

A.J. playing in the swirling streamers

Oh, the joy of simplicity!

Posted in Activities for toddlers

Every King has a Queen and Coretta Scott King was Dr. Martin Luther King Jr.’s Queen. I found some excellent, free printables of Dr.King to color at Family Education. This site has a wide selection of printables for holidays and even for Black History. 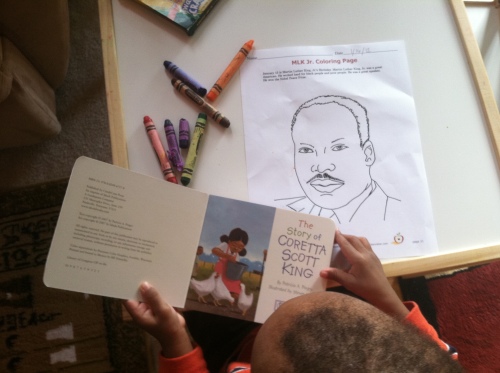 Board book about Coretta Scott King

Celebrations and streamers go hand and hand. We had more streamer fun today. I took down the “streamer net” and tied it to an extendable curtain rod that I placed in the entryway of our kitchen. I saw this done over at Having Fun at Home and had to try it! 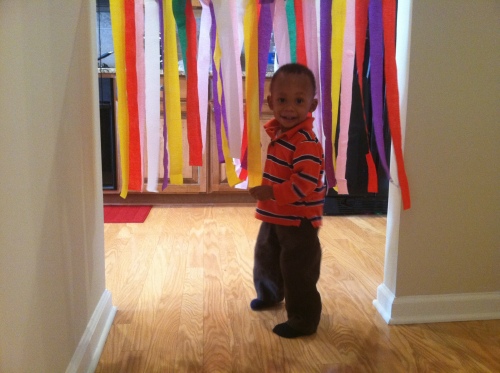 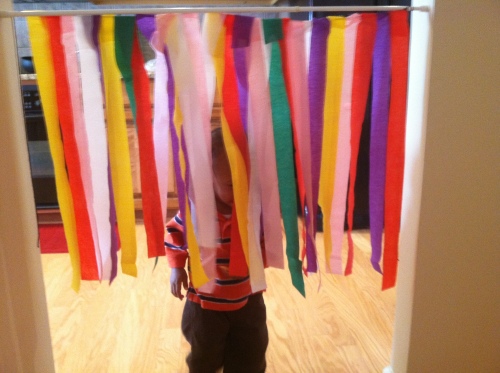 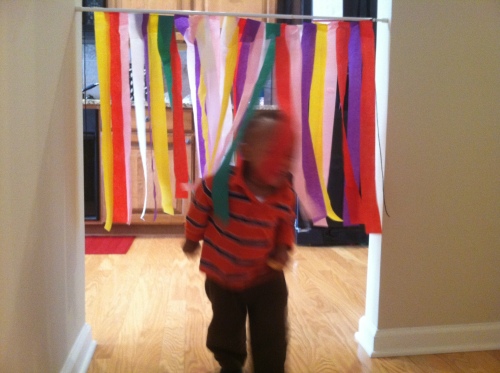 What did your little one(s) do to honor Dr. Martin Luther King Jr.?

Balloon volleyball with tubes as posts

1. Balloon Volleyball with Tubes as Posts – I used old wrapping paper tubes and covered them with wrapping paper for a uniformed look then slid them onto two paper towel holders as posts. The painters tape is kind of tacky, but it worked to keep the posts in place.

A.J. loved throwing the balloon over the “net.” He also enjoyed exploring the streamers. My makeshift net probably won’t last too long though because he’s kind of rough with it, but that’s okay.

2. Balloon tennis or balloon swat – These DIY racquets are made from cut pieces of tri-fold poster board. I covered the boards with thick scrapbook paper and added popsicle sticks for handles. I doubled the sticks for a sturdier grip and duck taped them to the boards. I also used pieces of clear tape around the handles to keep them from shifting during play. Although I am a tennis player, I got this idea from Toddler Approved. They used paper plates, but I didn’t have any on hand, so I used what I had available.

A.J. had fun with his racquet although he preferred to hold the square part instead of the handle. I will keep these in storage and bring them out periodically until he gets better hang of it. 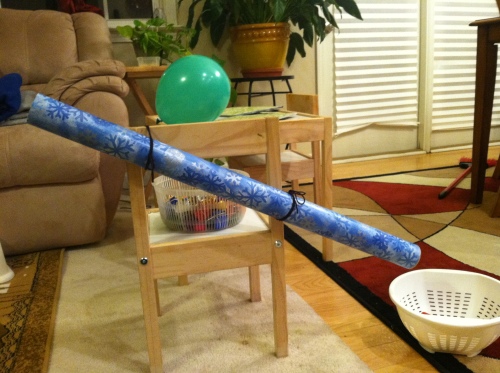 3. Tube Sliding – One of my favorite blogs is MontessoriMOMents written by Lori. Although I saved several of the tubes for “projects,” I hadn’t done anything with them. I saw the tube sliding on Lori’s blog and got excited because I knew A.J. would probably enjoy it, too. And I was right. He got a kick out of sliding items down the tube and watching them either land in the basket or spin up and out of the basket due to speed.

We haven’t tried the next few activities yet, but they’re on my play list.

4. Golf – I will use a tennis ball and cut the tube for A.J. to use. When he gets older, we can use golf balls and a club. His Auntie plays golf, so we will have to get him ready!

5. Baseball – I really should say, “balloon ball.” He can hit the balloon with the tube as if playing baseball.

6. Fencing – The tubes look like they were made for jousting. Why not explore this sport and use it as a learning opportunity.

7. Javelin Throw – I can see A.J. throwing the tube like a Javelin during outdoor play. Ohhh what fun we will have!

What are some other ways you’ve used wrapping paper tubes for toddler fun?